Like many lakes in northern Indiana, Pretty Lake has experienced an expanding lake weed problem over the past few years.  The prime nuisance weed in and on our lake is Eurasian Watermilfoil; an invasive, non-native weed that is rapidly taking control of our lake.  Milfoil has no natural predators.  If left unchecked, it will crowd out the more desirable native plant species.

Successful control of Milfoil requires several consecutive years of herbicide application.  Consequently, the Pretty Lake Conservation Club has launched an aggressive, multi-year Weed Control Program in cooperation with the Indiana Department of Natural Resources (DNR) to combat the threat.  The program will commence with an early-season (probably April) application of a contact herbicide called Diquat.  It is likely that some small amount of Milfoil will re-emerge after this application, so we have planned a contingent application of a systemic herbicide called Navigate (2,4-D) in July, if necessary.

LARE grants are generally good for three consecutive years.  We hope to receive about the same LARE funding in each of years two and three.  We will then re-evaluate to determine necessary future steps.

Our treatment plan is based upon a survey that was conducted in September of 2012.  The results of that survey, which identified several Milfoil beds totaling 25.31 acres, are shown on the following map. 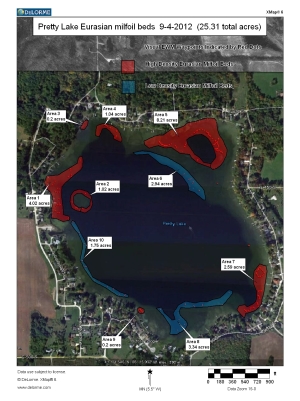